Nothing ever stays still for long. I've been messing about with making a duster for a while, usually with extending a piece onto the bottom of a lab coat. Not long before Christmas I was wandering around the interwebs and found a place offering custom lab coats. For a laugh, as custom always costs, I got in touch.

Scooby-Doo wobbly screen forward a little and I've now got a lab coat in a pretty decent base colour that needs a few inches taking up. 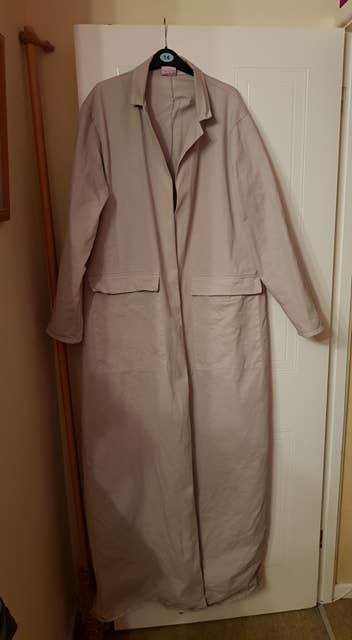 It's 100% cotton, dyed using Dylon's new machine dye Sandy Beige. I think it's a much better tone than the Pebble Beige I used before. I've removed all the popstuds and snaps from the coat, even though I didn't ask for them to be put on in the first place. It's made a bit of hole in one pocket flap, but that's weathering and wear in the field for you. Easy to fix anyway.

When my other project calms down a bit, I'll look to get the colours on this coat but Im happy with it so far. Can't really complain at £22 plus VAT and delivery.

I'm also expecting a test mould of a new donut made in the UK. It doesn't have the pronounced flare outwards that my current one does and it looks closer to what you see on screen. It also doesn't have the indents in the back, as I can only find references that show painted lines.

Love the duster!, what was this website?? seems like a very good price for a custom one. Looking forward to seeing your progress. Hope we dont have too many sarges at legoland this year lol
SGT Deadmeat Dax. " RRREEEBBBEEELLLSSS!
Luitenant " Maniac" Dax. " You see! You CAN fly a lambda shuttle through Beggers Canyon!!"

I realise I have not appeased the Gods of WIPs by leaving this derisory token of progress.

Hence, let's see what's happened since then and clear up some points that might help people out. The hose on the pack is pond hose, about 20mm ID and fits snugly onto a 1/2" BSP hose end, held in place through a hole in the pack pocket by a matching flange nut on the other side. The pack is padded out with a partially inflated beach ball so it weighs nothing and packs down flat. 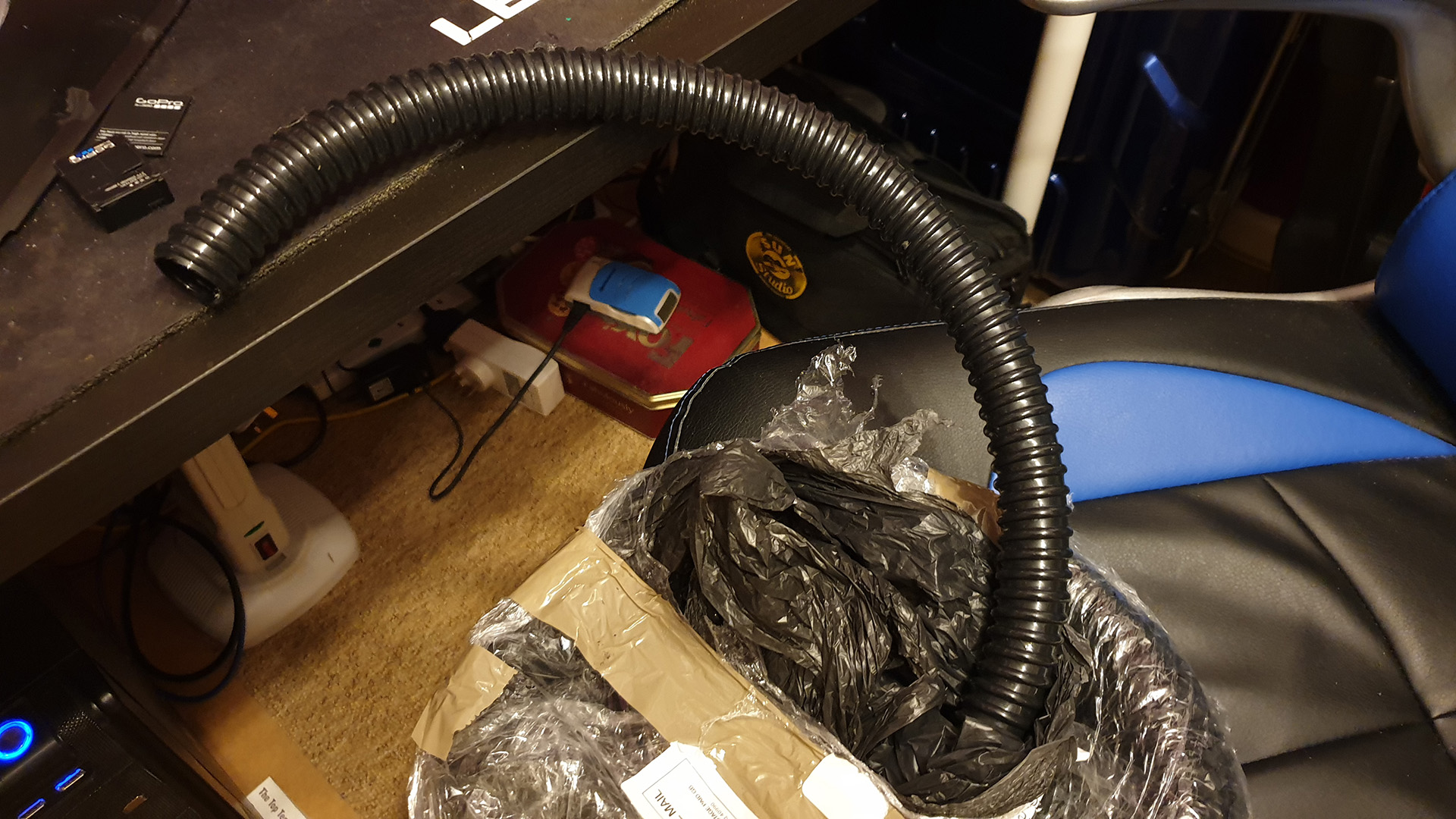 The duster was custom made and then dyed in Sandy Beige. Big split up the back added with a tab across it to approximate the reference. 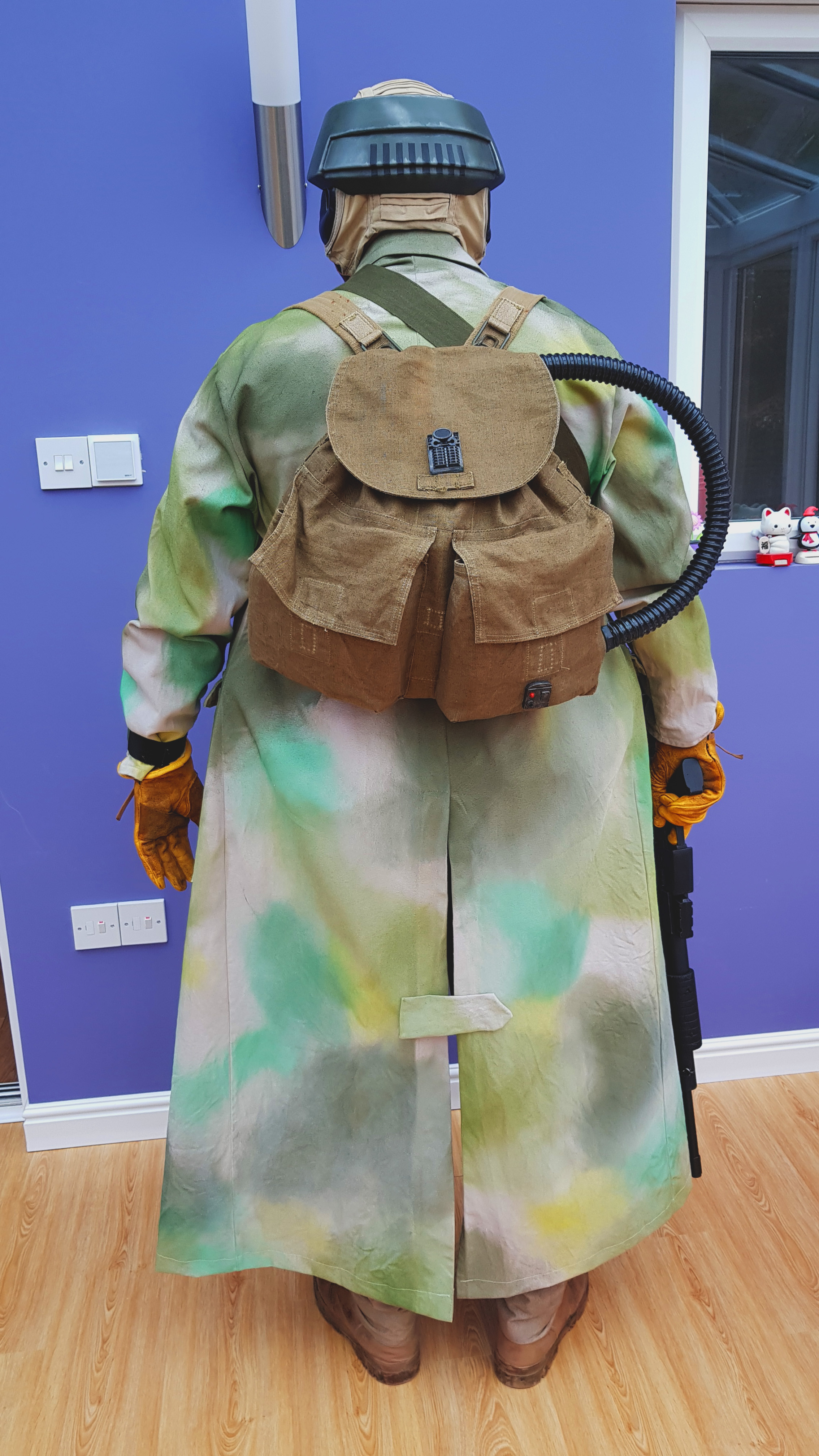 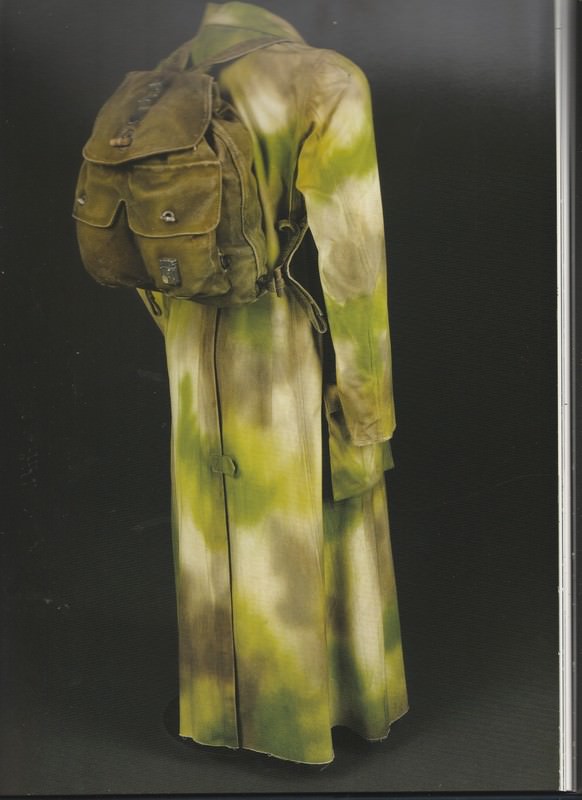 I swapped my original donut with one from RWA Creations, after helping with some references during the design process. To me there is no comparison, the RWA looks so much better than my other one. No indents either, the stripes are painted. 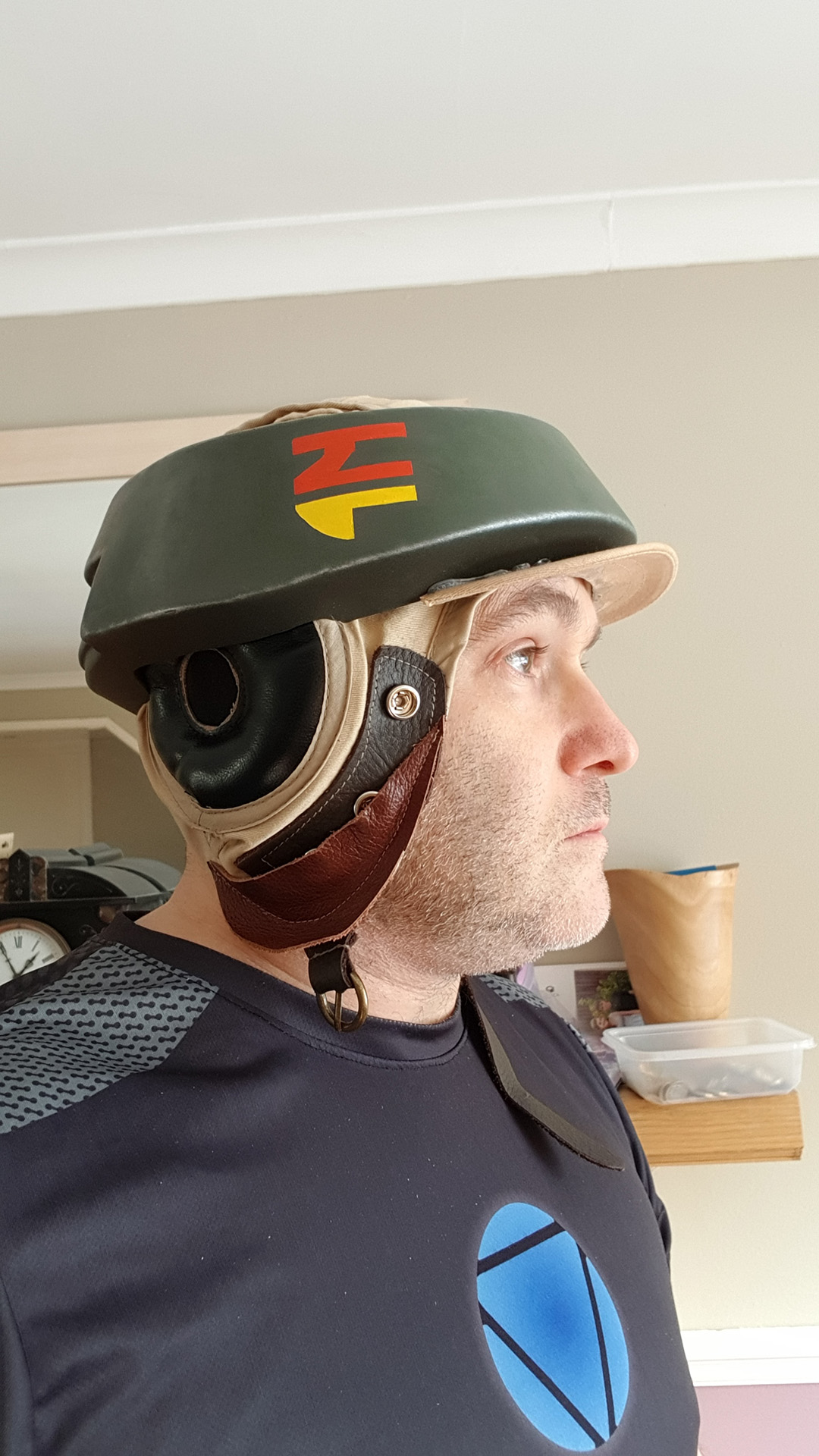 And it's been signed by Warwick Davies, officially Ewok approved. 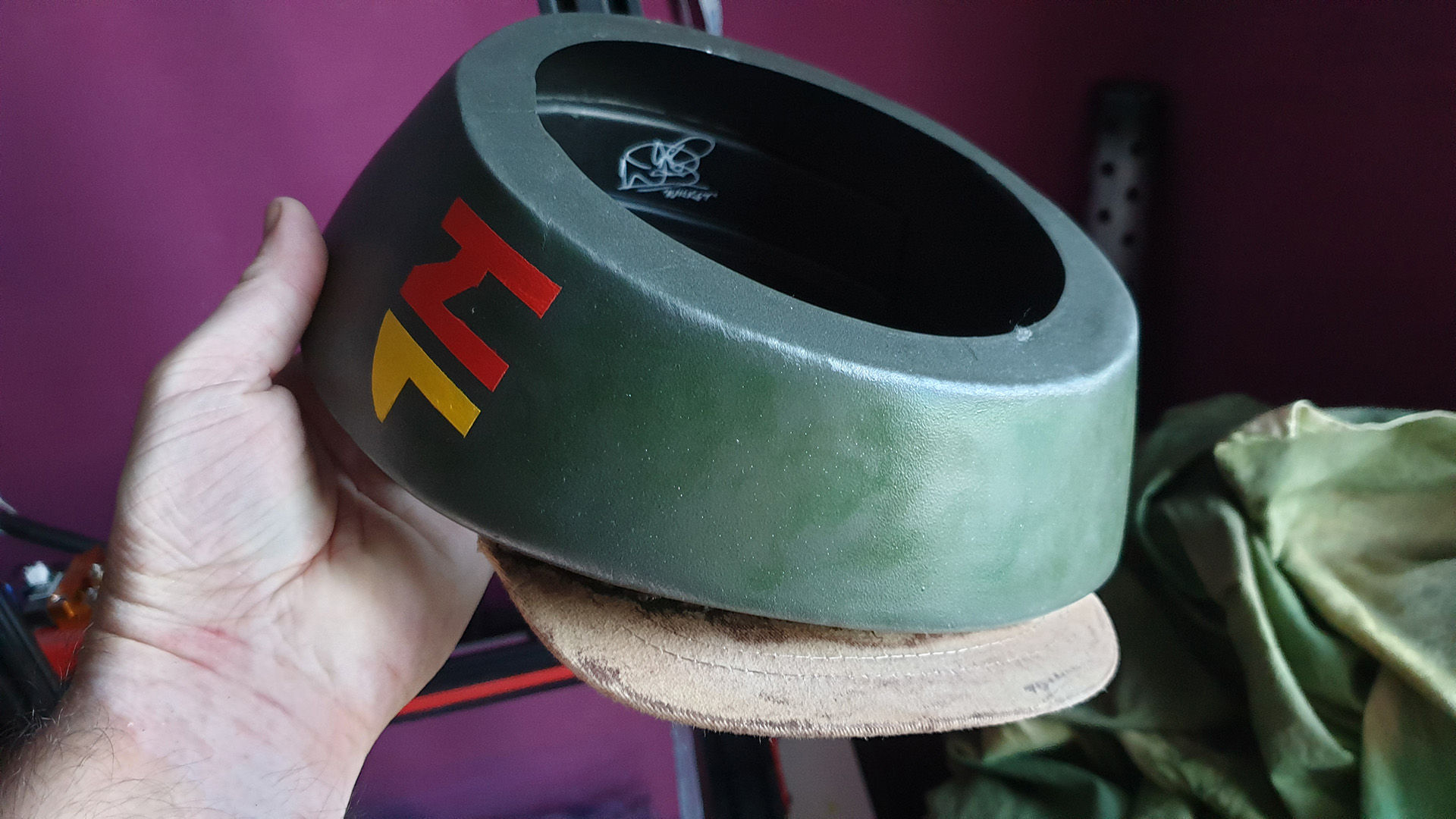 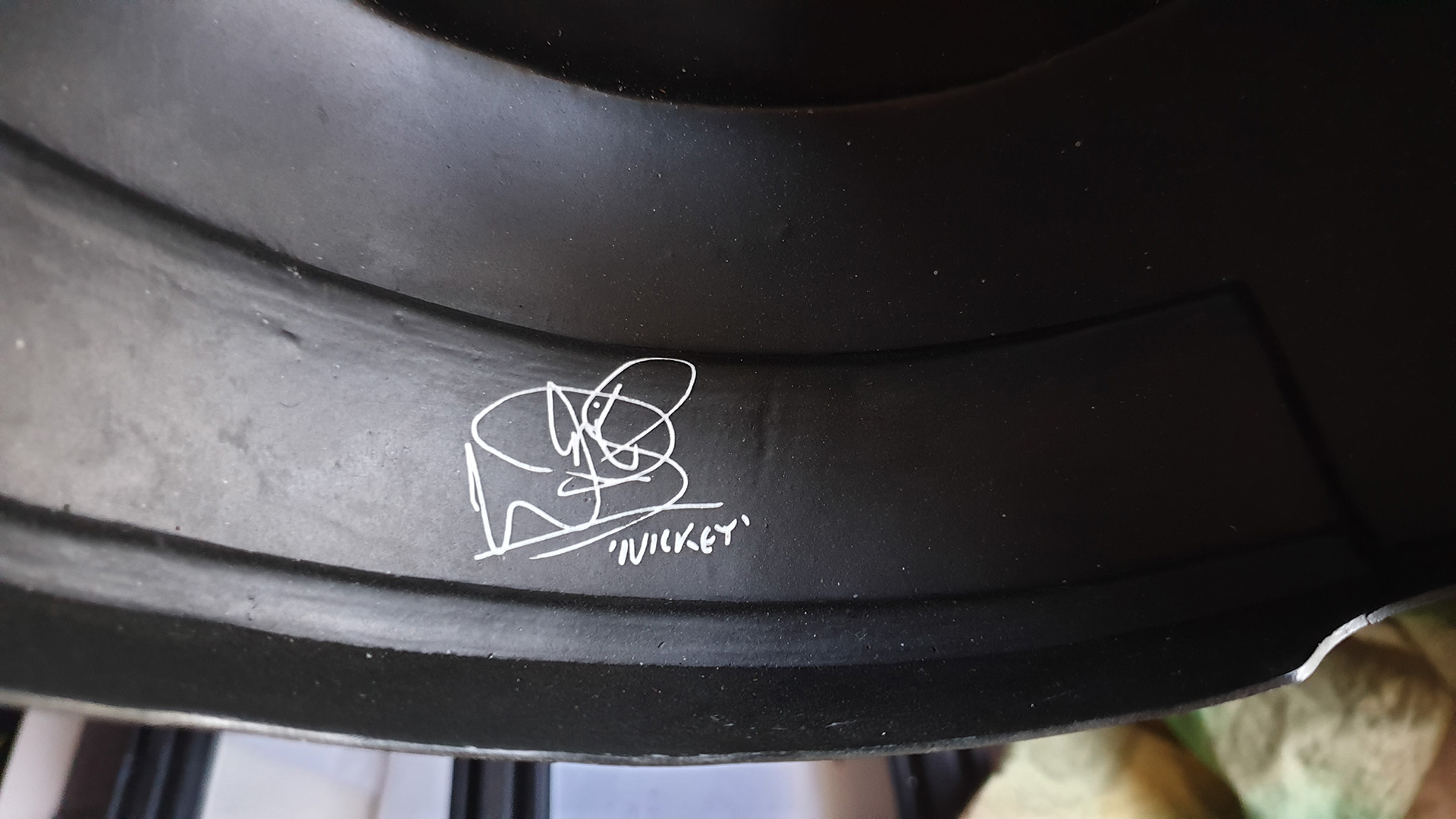 Belt has been replaced with a replica of the screen used M1956 items. 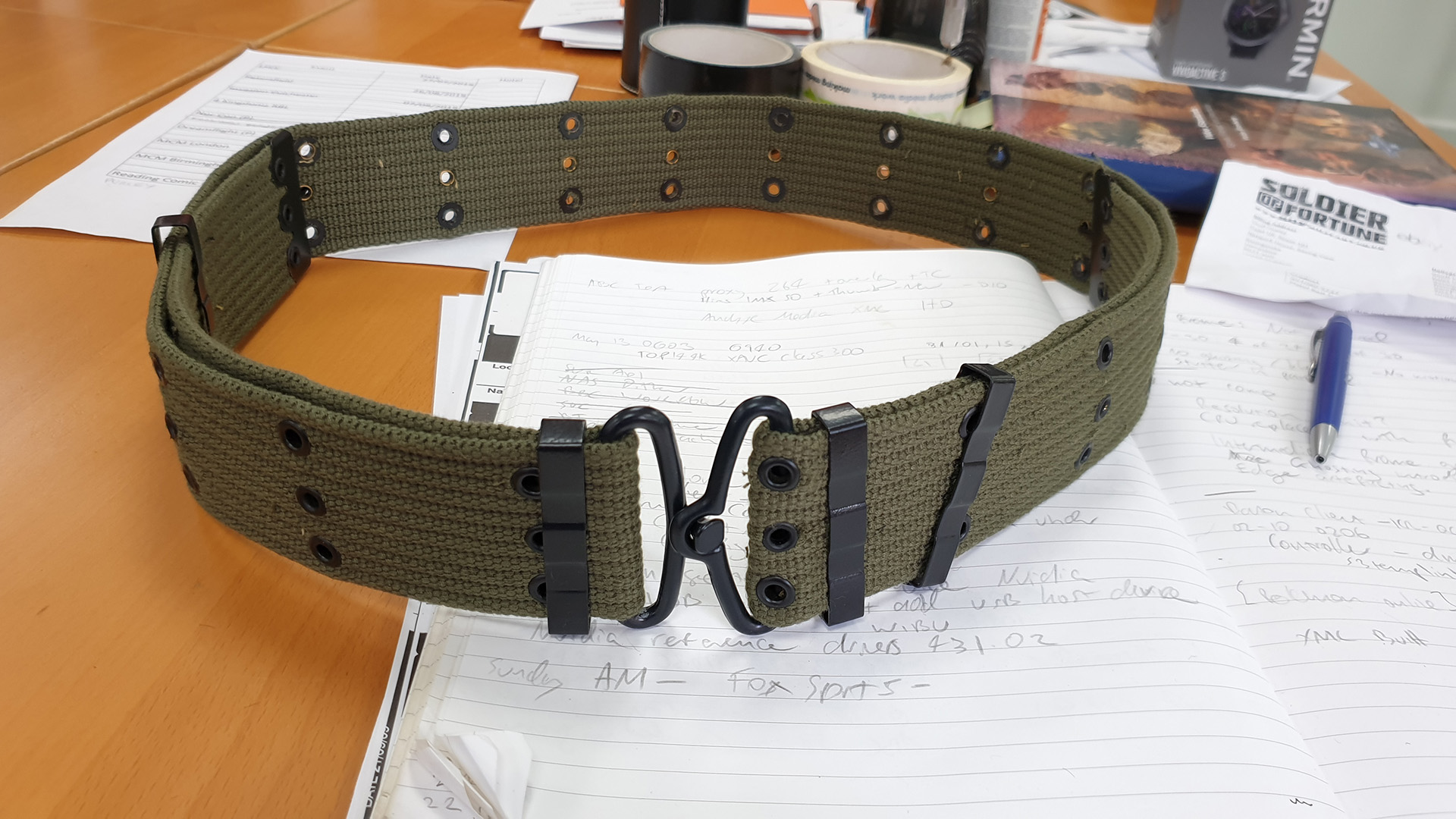 2 M1956 magazine pouches and dressing/compass pouches added. US labelling removed and dirtied up. 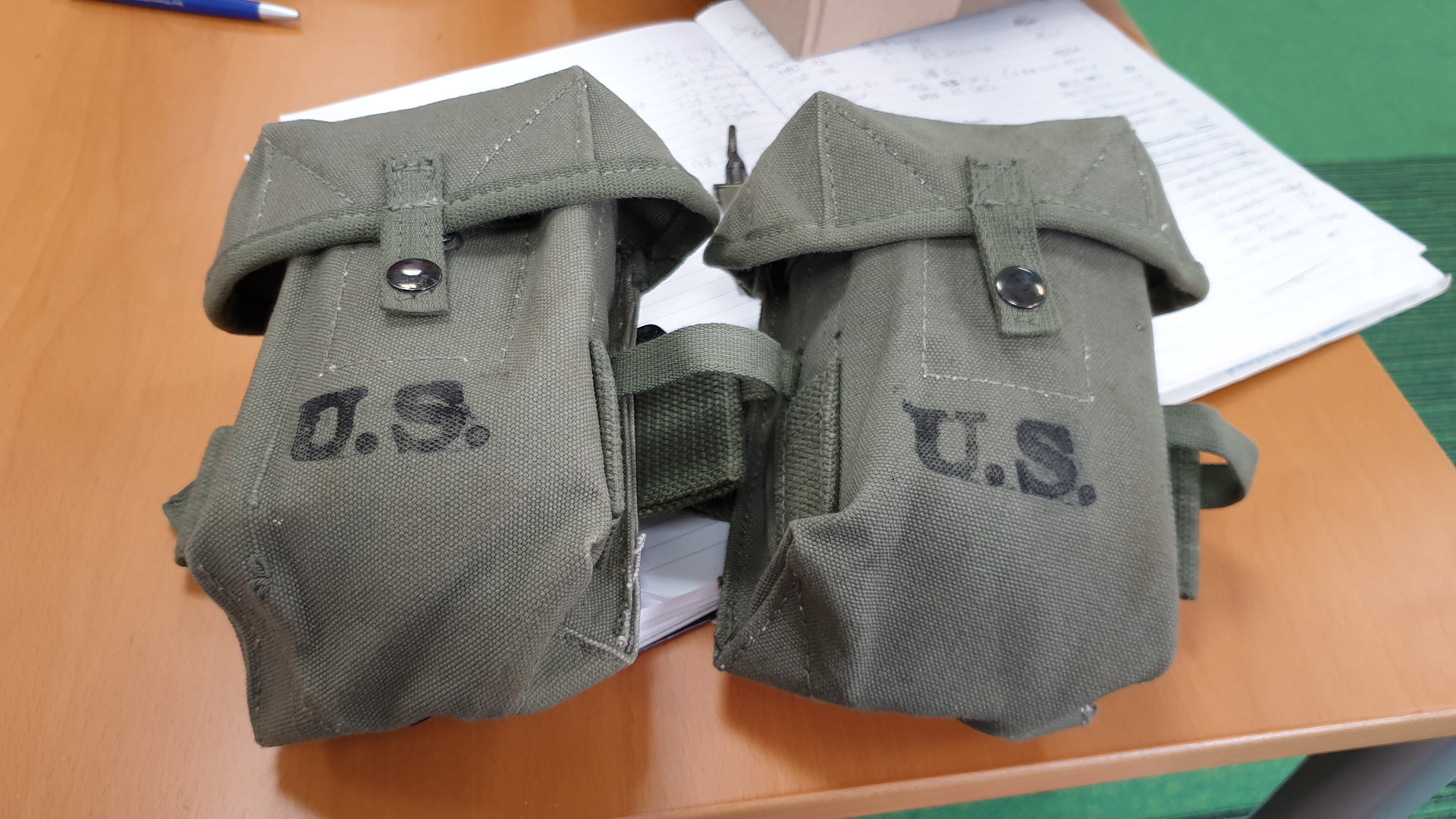 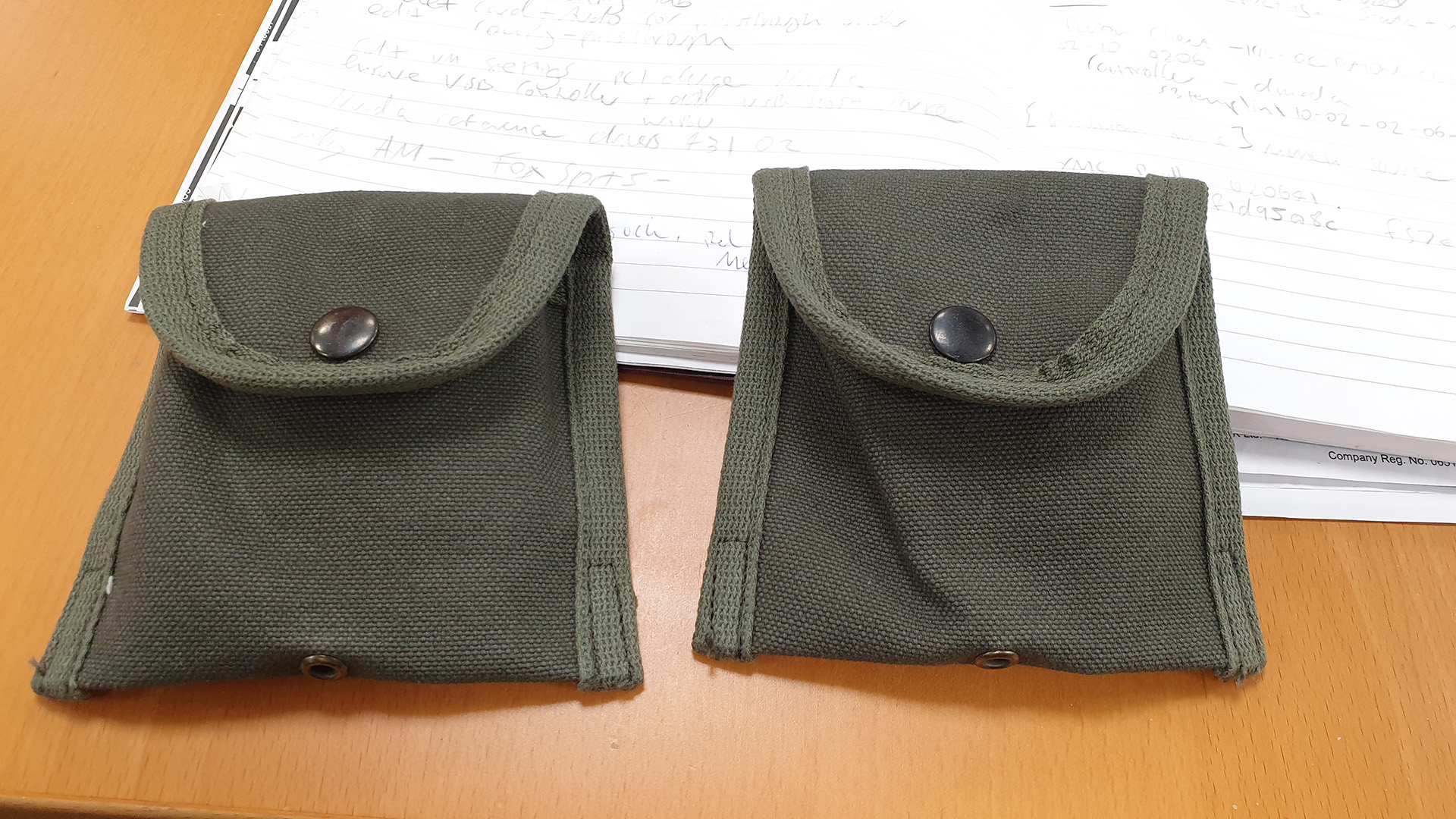 I had a go at remodelling the bandolier greebs and printed my own. 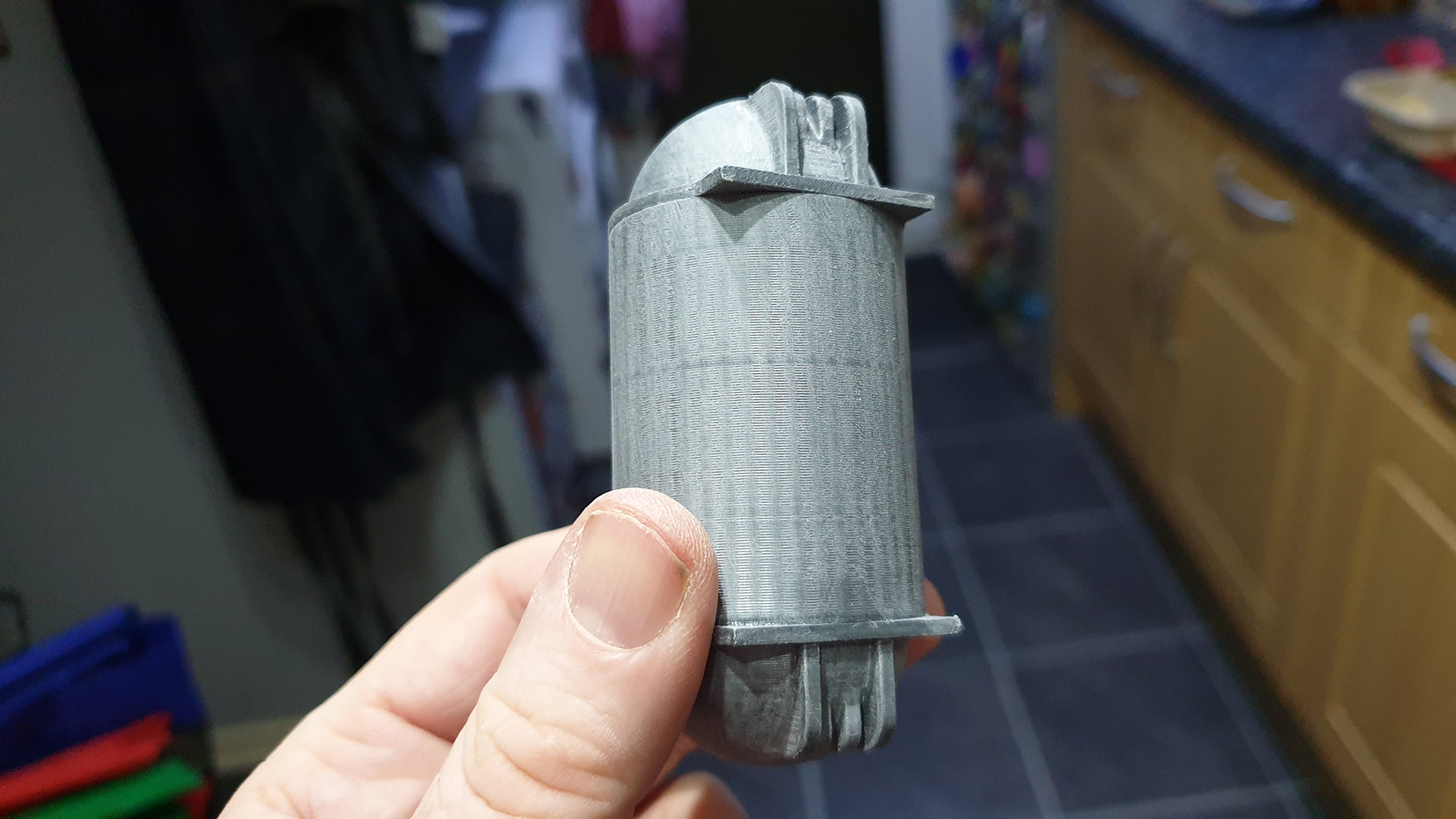 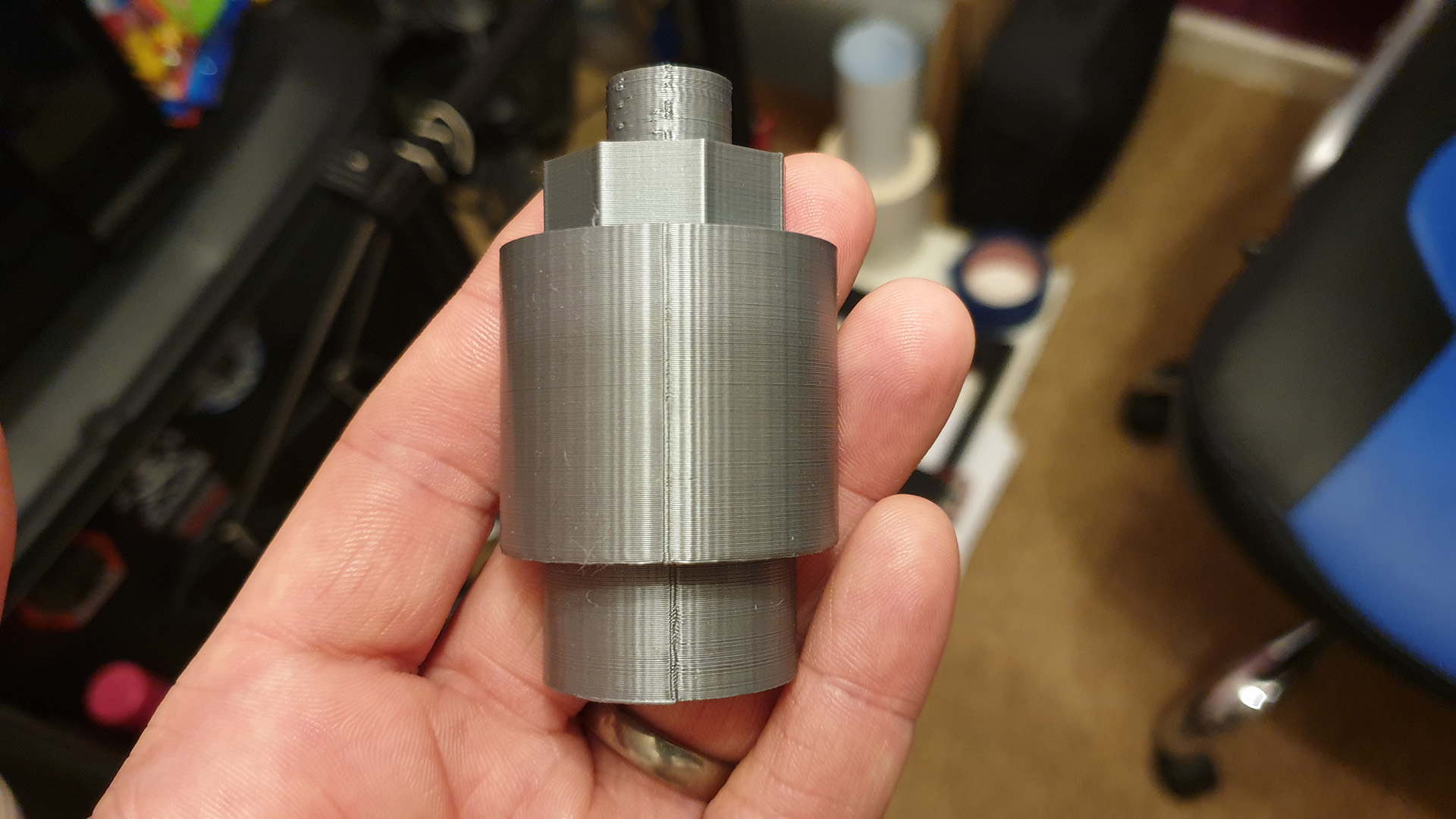 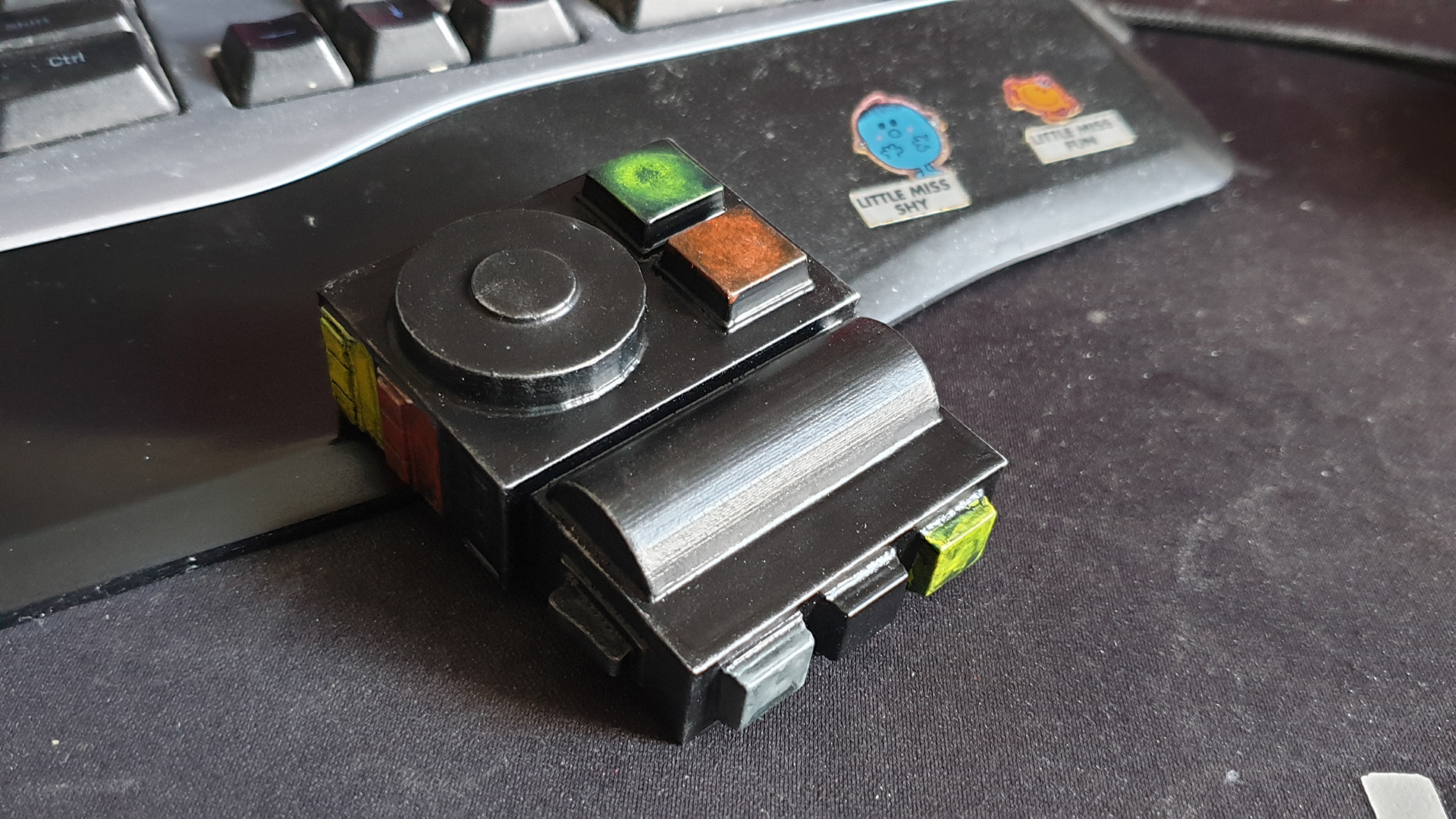 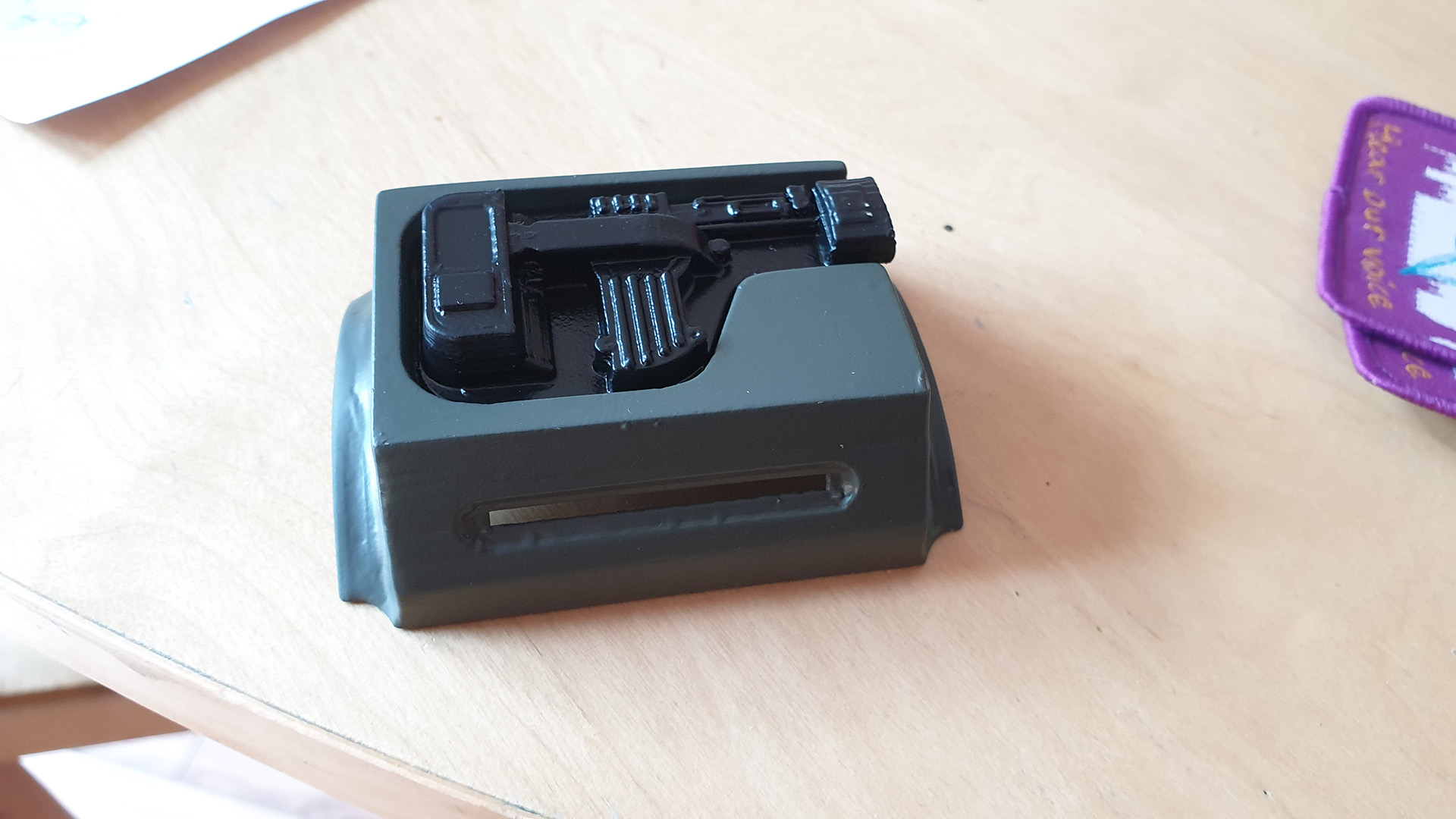 Gloves have been replaced with a pair of replica WW2 US airborne jump gloves. Slightly less yellow than before. 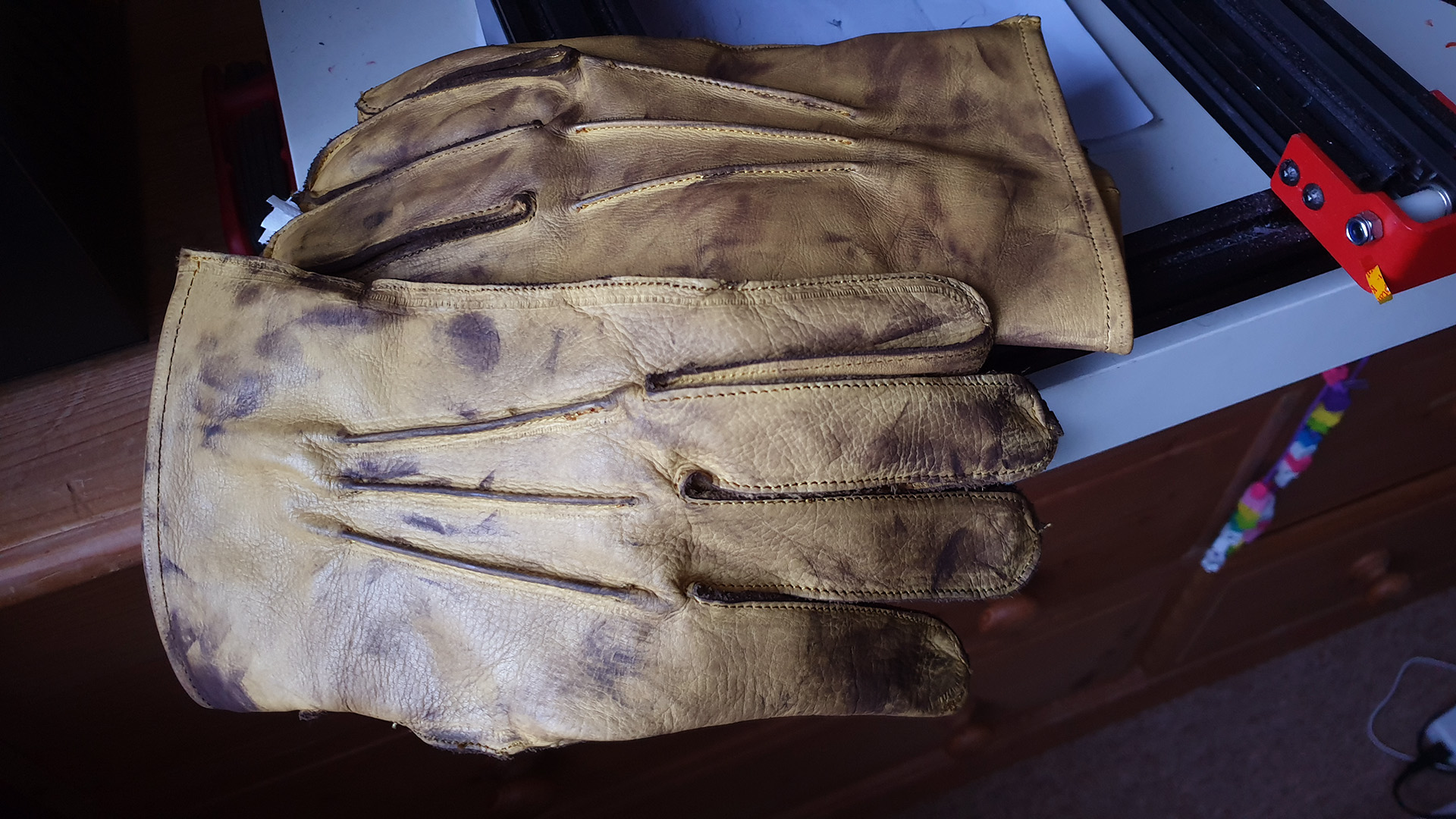 The Gods of WIP are pleased (so I'm told)

looks great, do you still have the website for the customer dusters?
Top

Same one as a few of us have used.

So, when there was a small gap in the weather for spraying matt clearcoat, we made some more progress. 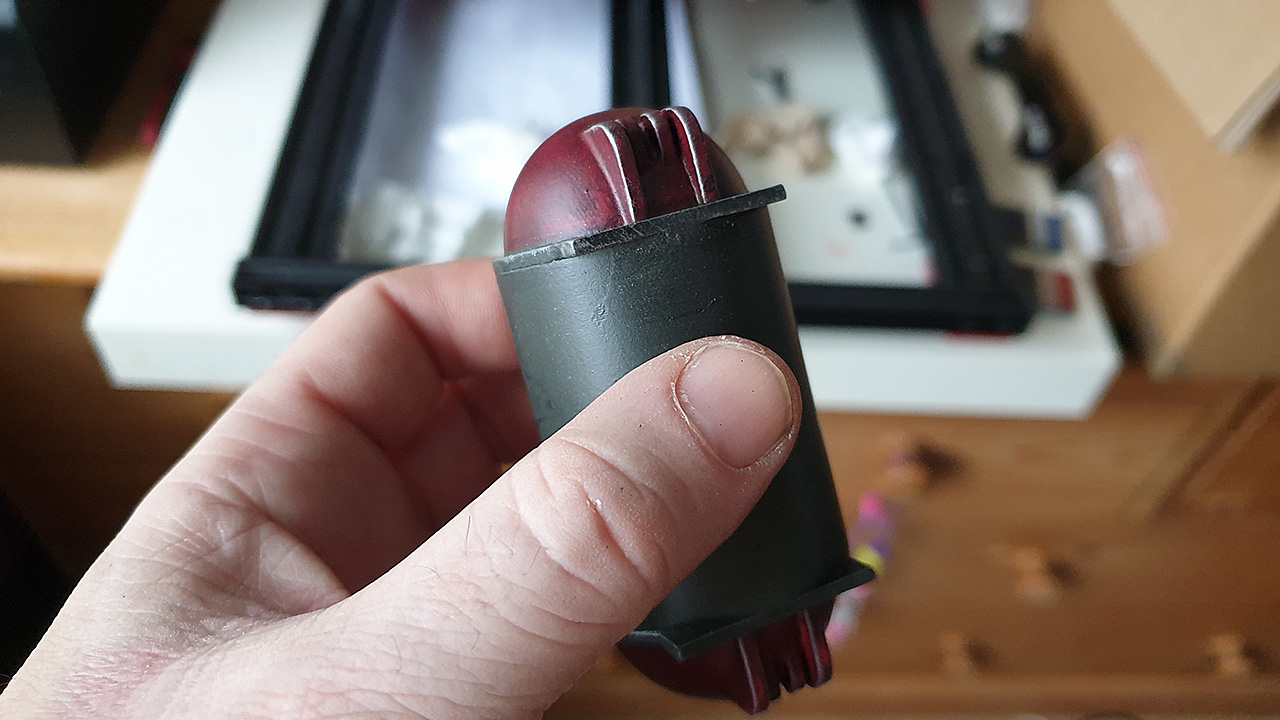 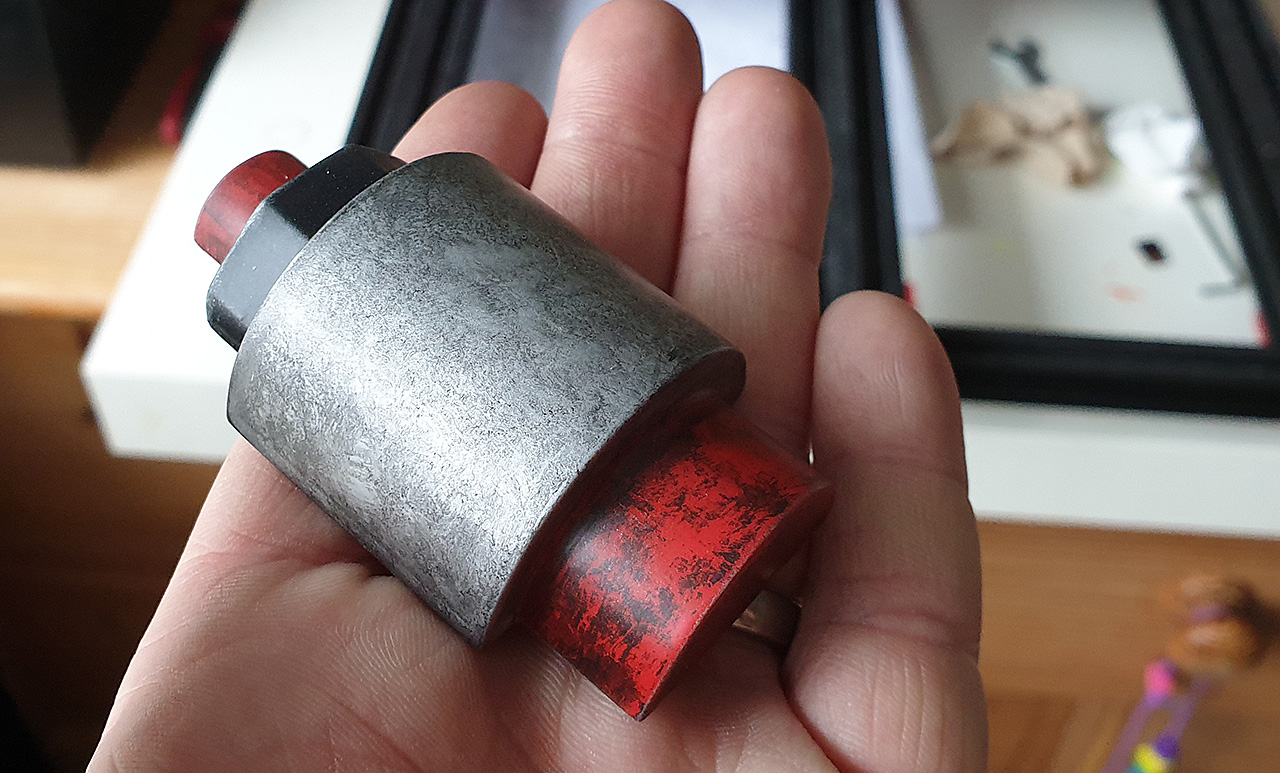 Replaced the old ones in the bandolier and put a coat of matt clearcoat on the comm unit, 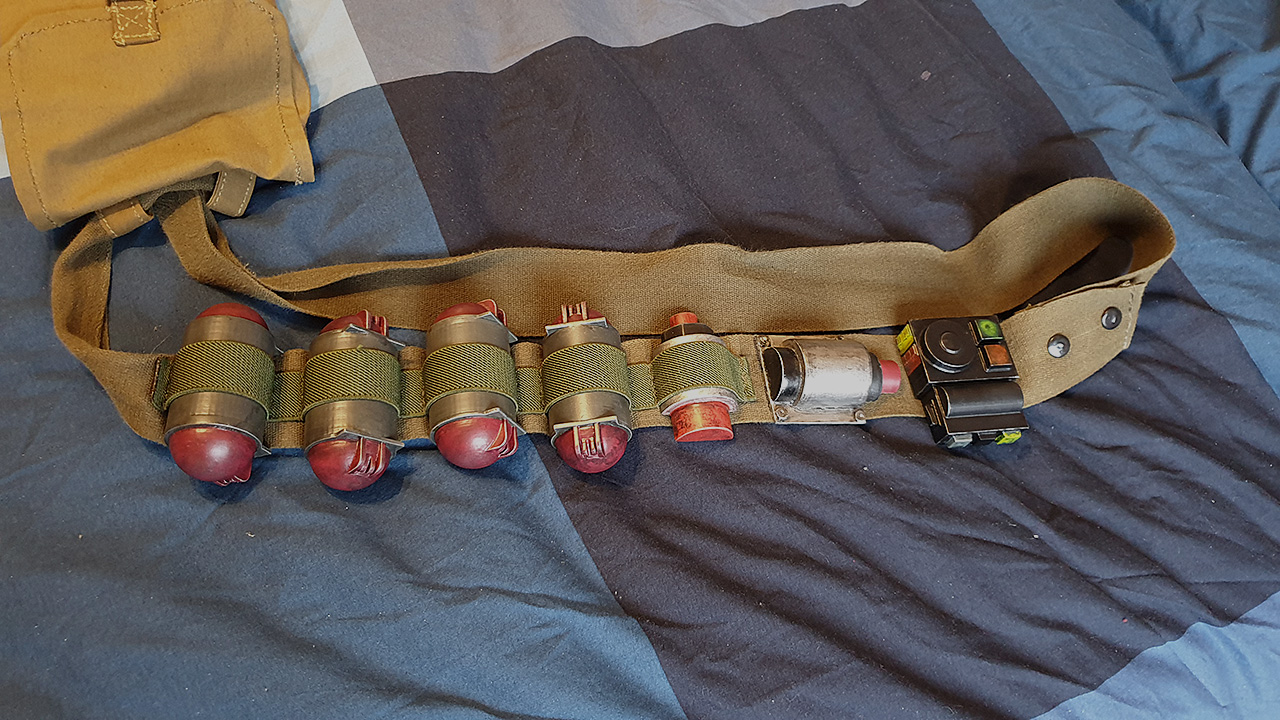 Bit of black misting to colour match the pouches. Flumps now on both side. Changed the order of the pouches to stop the duster billowing out in a weird way. 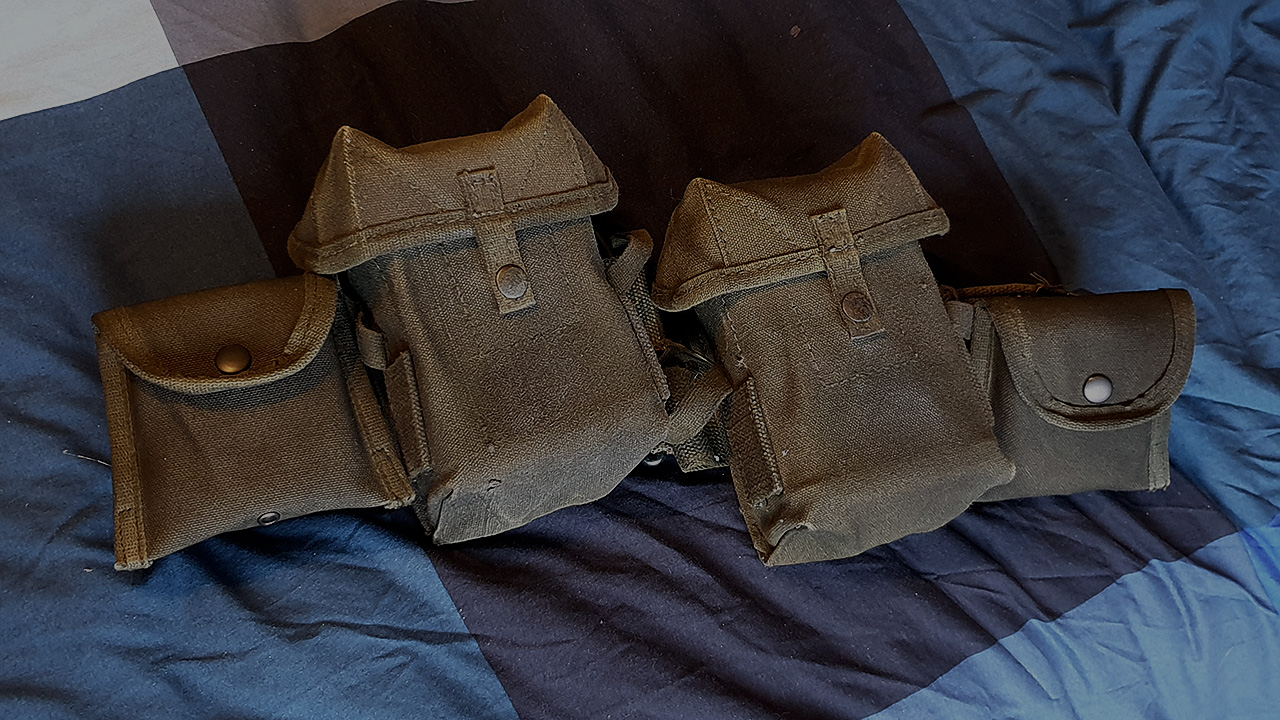 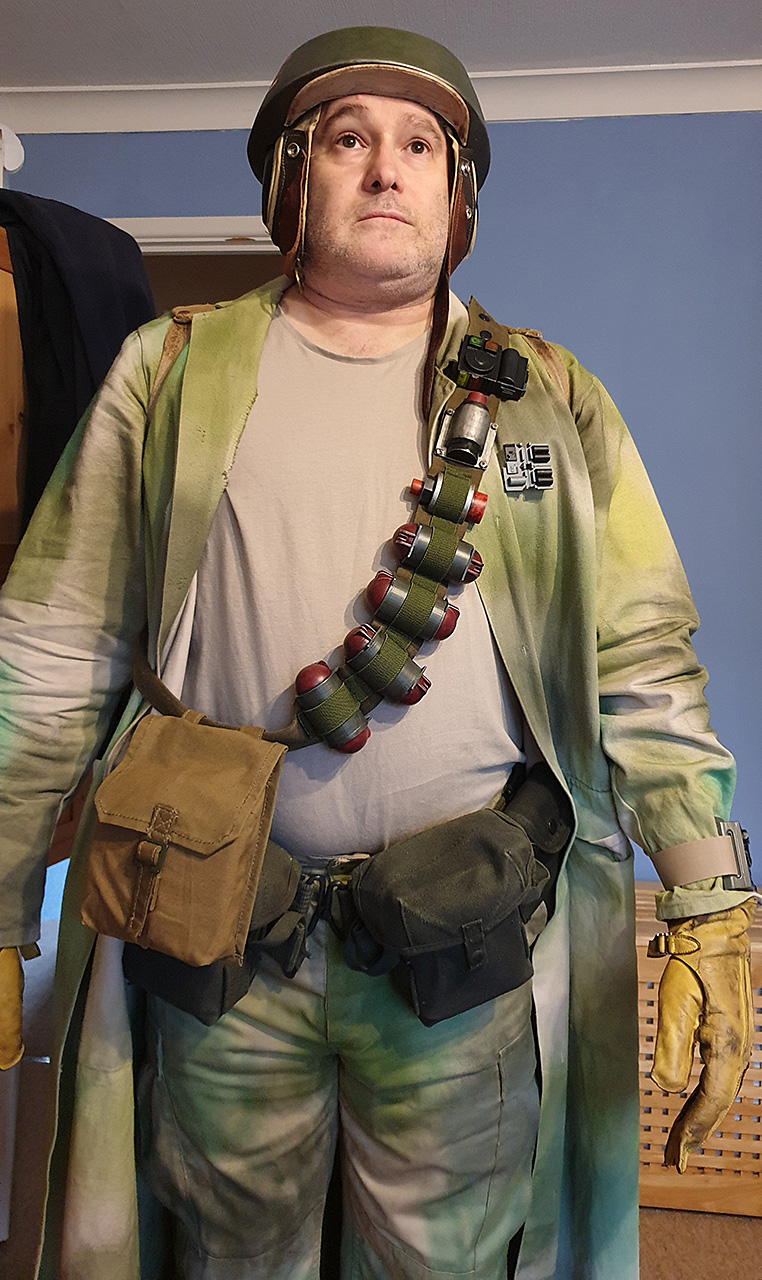 I can't think of much else I'd change, Maybe a smaller comm unit and I'd like to have better gaiters but it's miles ahead of where it used to be.
Happiness is a warm A280. Or A300. Even a Glie-44 at a pinch.
Top

I put this on the other day for the usual Thursday clap session. (In my head, I heard that differently.)

I wasn't happy with the amount of the lurid and unpleasant Holiday Green it showed in pictures. Too much for my liking. The next day or two, or three I found some leftover Moss Green. I thought I had more but it can get used up quickly. I oversprayed some of the nasty, evil Holiday Green patches, making it darker than other Moss patches. I liked this so darkened some of the Basil too.

I left the pics big as you need to go in quite close to get a realistic appreciation of the diffusion of the dye.

I'd be quite happy to see Holiday Green removed from the requirements. 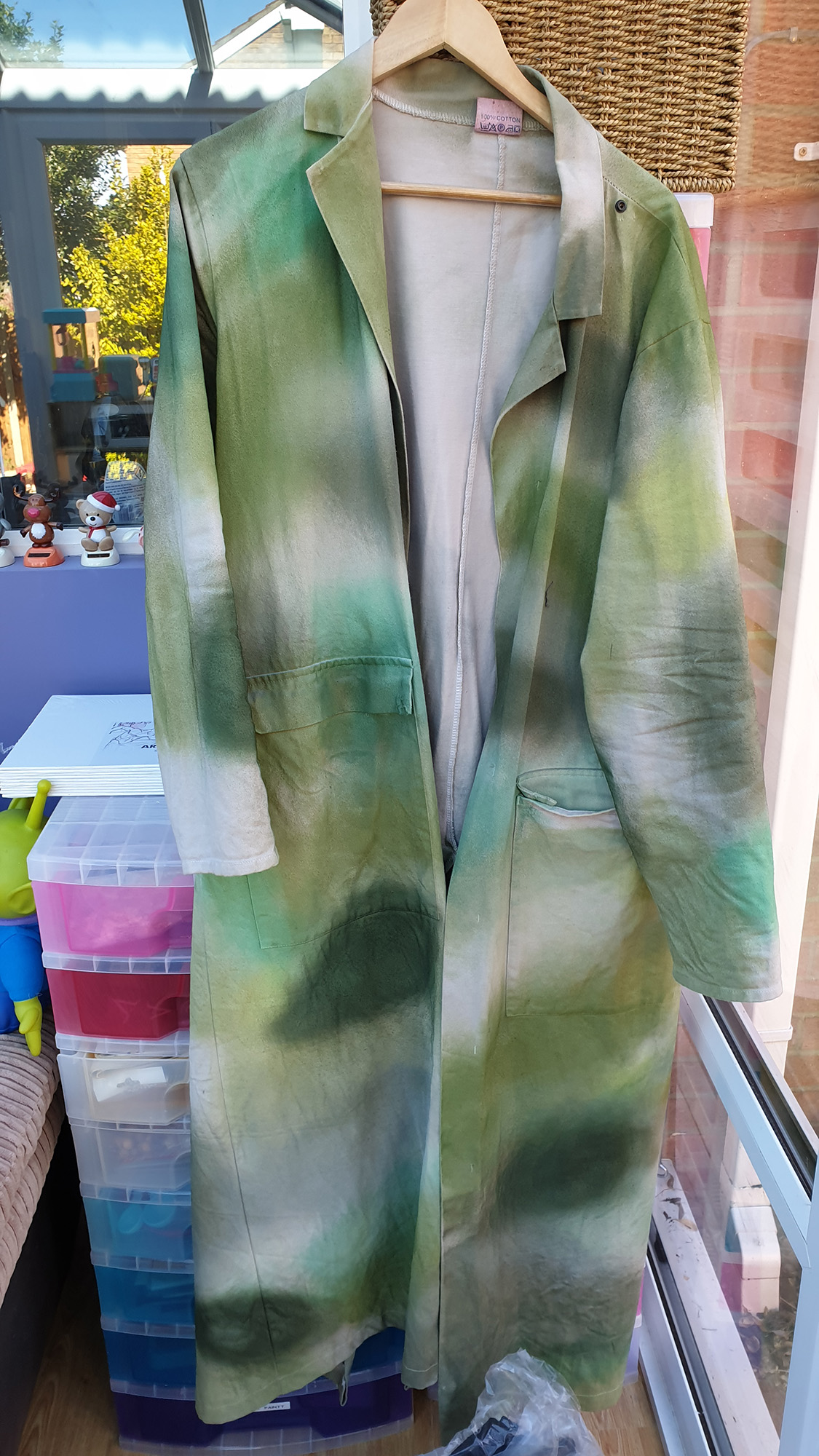 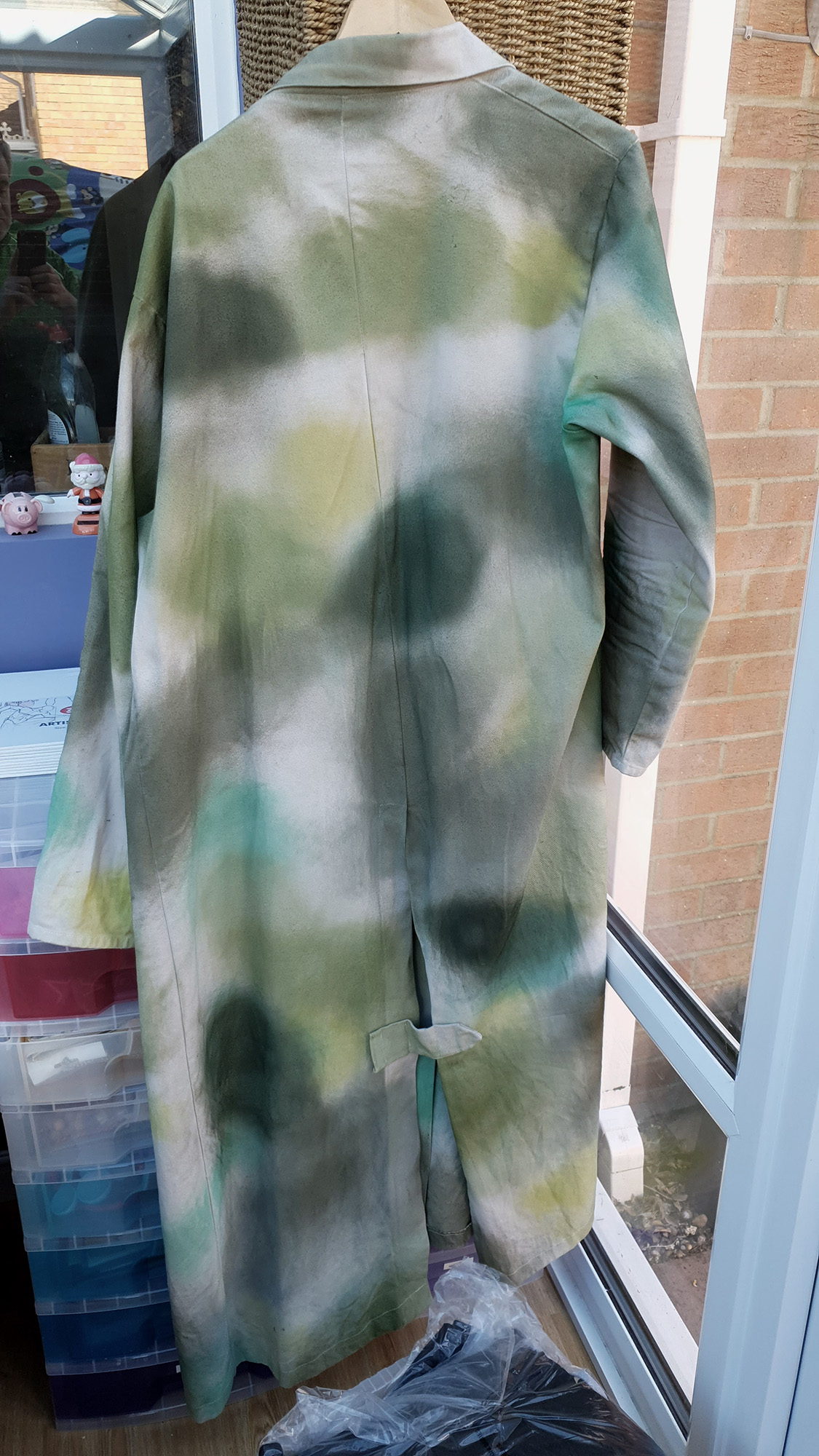 As an aside, I contacted the company that made yours (pre isolation) and currently they aren't doing custom builds due to their machinist who used to do them, leaving.
Cleared Costumes:

Thanks for that Phil, are they the one's that everyone used? I vaguely remember the other Phil getting a custom duster done, but I think that was for dodonna?
Top

tenebris wrote: ↑
Mon Apr 20, 2020 8:45 am
I vaguely remember the other Phil getting a custom duster done, but I think that was for dodonna?

Ahh so we need a new source.
Top

Idle paws and all that.

I wasn't happy with the model I found of the bandolier comm, so I made one of my own. May not be perfect but I think it's better proportioned as per the refs I have. 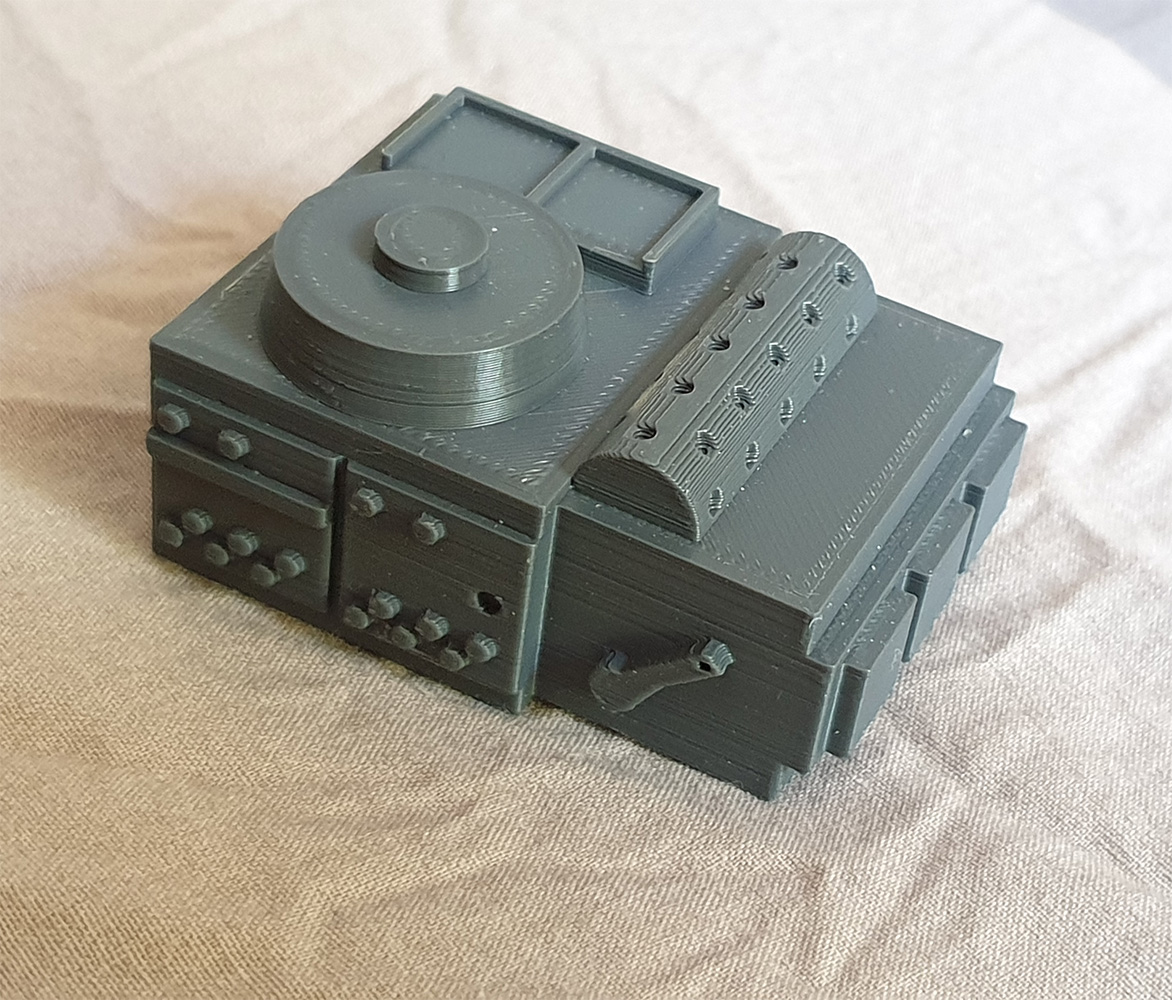 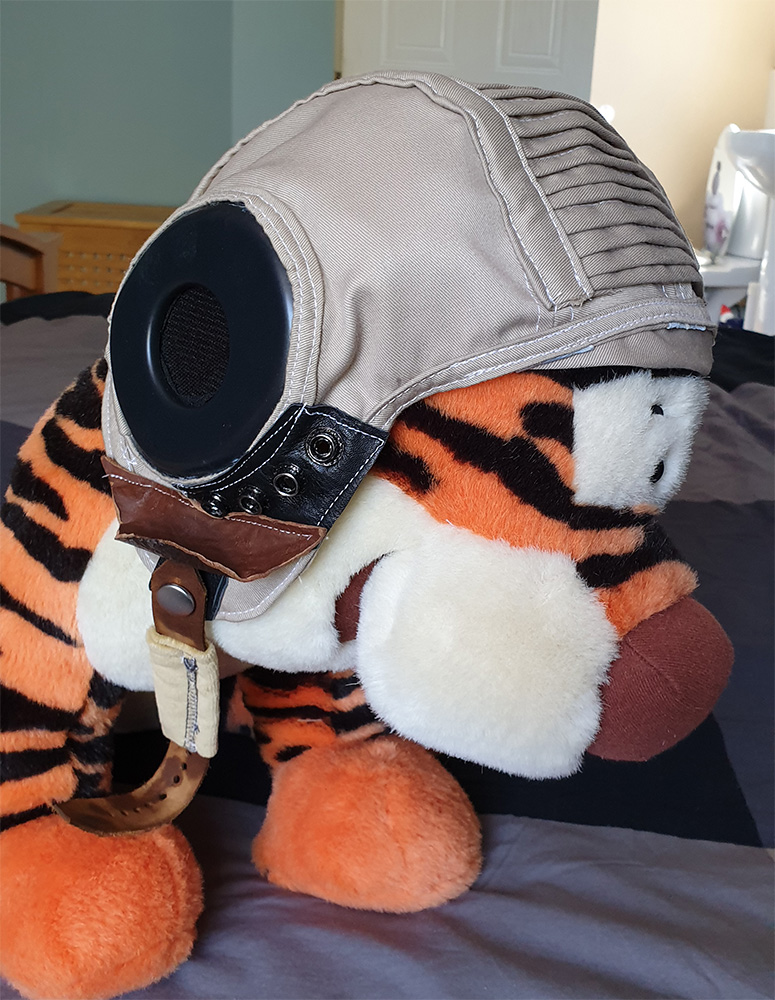